View source
watch 01:36
We're Getting Mutants in the MCU - The Loop
Do you like this video?
Play Sound

Dream Lottery is a special mode in Metal Slug Attack, first appearing in 4.0.0. After two Dream Lotteries, it did not appear again until 6.18.0. Dream Lotteries are a way to get various rewards for simply playing the game and the activities that offer the tickets.

Randomly appearing from time to time, the Dream Lottery is a special lotto-type system that players can participate in by obtaining tickets.

All accumulated tickets will be listed in the Dream Lottery tab. A "GET!!" icon is also shown whenever the player is able to obtain a Lottery Ticket in that particular game mode or feature.

Lottery Tickets are rewarded on each methods of obtaining it. Upon getting collected, they will be converted into serial numbers with three different colors: Blue, Red, and Green lotto numbers, which can be viewed in the "Dream Lottery" icon on the top right of the main menu screen.

Players can obtain a maximum of 30,000 tickets in total, with numbers starting from 0000 to 9999 from the 3 color classes. The more tickets obtained, the higher and better the rewards will be.

The tickets are then collected and accumulated for safekeeping. Tickets remain in the player's possession until the next game update, after which all tickets are removed and rewards are given accordingly based on the ticket's numbers.

The first two Dream Lotteries gave tickets for the following:

The third Dream Lottery gave tickets for the following:

Outside of unit parts, medals and MSP can be obtained from tickets. Rewards are given based on each number and color, and if none of these match, then SP rewards are given instead (MSP). For example, in order to obtain the best reward (rainbow Dream Lottery unit icon + 330 parts), all four numbers and the color of the ticket must match the winning numbers and color.

When the Dream Lottery is finished, a cutscene starts prior to entering the main area of the game where Mars People check your tickets and color for the winning numbers and colors. This cutscene can be skipped to reveal the results immediately.

All rewards that can be obtained depending on the tickets you have collected are distributed via Mail at the end of the Lottery's event.

Fio for Liberty's reward table was the following:

Alesha's reward table was the following:

Olga's reward table was the following: 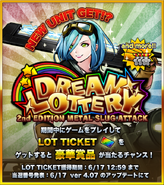