Jephet is a playable unit in Metal Slug Attack, first appearing in the Extra Ops titled 'Task Force 2nd' where her parts can be obtained through her limited-time Step Up Crank.

A soldier recruited by the Regular Army, Jephet operates a large coil tank to aid her attacks. For her primary attacks, she orders her coil tank's frontal core to discharge a small current of electricity against the enemy units.

For her special attack, the 4 rear antennas of the coil tank flies to a set distance before discharging themselves to generate a large electricity in the affected area, dealing rapid damage. Jephet is also healed at the same damage she dealt.

All of her attacks heal her for the damage she deals, and they also have silence capability with

Like Otto, any attacks that would stun Jephet will cause her to restore her health, although she heals herself in small batches rather than a full heal.

When placed on the same deck with Special Gisee, they form the "Task Force II" team. This reduces their AP cost by 10%.

All of Jephet's attacks are capable of silencing the enemies with

Coil Spark (Spread) - Orders her coil tank's 4 antennas to land on a set location before they discharge the area.

4 adds an another set of antennas. 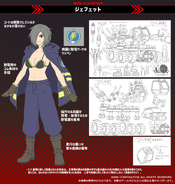